So 13 posts in and I haven’t yet talked about food. Well, here it comes.

I hit a personal goal last weekend and decided to celebrate. Most people think about buying that TV! or treating themselves to a Spa Day! or even getting out of town for a few days. For me it was- what fast food place am I going to?

Doesn’t seem that out of the ordinary for your typical American, right? Well, I chose Jack in the Box and over six different menu items, spent over $17. $17.16 to be exact.

When eating is one of your top three, all-time favorite things and you’ve decided A. I’m starving, B. I’m on a budget and C. I don’t care about putting my life at risk- Jack in the Box, McDonald’s, Taco Bell, Pizza Hut are at the top of the list.

After getting past the initial criticisms of gorging yourself at one of these below satisfactory establishments one can’t deny that there’s an art behind your item choices. Though, most of my choices will be savory, I try to even it with sweet as best I can.

What better way to balance that than with a milkshake? Burgers and shakes go together like meat and potatoes and a shake is perfect not just for drinking, but also for dipping. So I ordered a small chocolate shake with whip cream and a cherry with the idea that everything else will end up in the shake at some point. 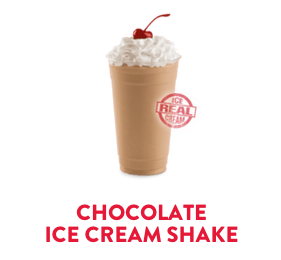 I know what you’re thinking. You’re going to dip your burger in a shake? DISGUSTING!  First off all– dipping fries in shakes is something most people have experienced at a fast food joint at some point in their life.  I’d argue that most of those people actually enjoyed that.  If this is the case, at what point does one tell them self- Better stop there, though. Don’t want to ruin this gourmet burger. Come on. You’re at Jack In The Box for God’s sake.

Anyway, I’ve never really been huge on fries so I wanted to try something else. Jack In The Box has a huge menu with a ton of different selections for each course so I went with an egg roll to kick things off.

The next thing I went with was a Jr. Bacon Cheeseburger. They’re small, on the value menu and would ready my body just enough for a Sourdough Jack.

As I said before, I’m on a budget but I wanted to try one of J-in-the-B’s flagship sandwiches (which all go for around $4-$6 each). For me, the Sourdough Jack filled that role.  All said and done, I was disappointed with it.  The bread was greasey and buttery as you’d expect but that actually made Jack’s lack of flavor in their burgers even more apparent.  Whatever.  Good thing I had that chocolate shake to mask that. Literally.

Even if I stopped ordering there, it would still not be advisable to eat that amount from any fast food place. Thanks to my stomach, though I ordered three more items.

Breakfast for dinner is one of my favorite concepts when it comes to eating.  That being said, I also wanted to add more “sweet” to my gourmet arrangement.  To accomplish this, I ordered a waffle breakfast sandwich.

The waffle itself was soft (which I actually ended up liking) and also had a good amount of syrup flavor baked in.  The sausage paired nicely with that.  The eggs were of standard fast food breakfast caliber- pretty much the same you’d get from Burger King or McDonald’s but the cheese melted over everything in more of a natural way than that of Jack’s competitors. This really brought the whole sandwich together for me.

I will say that this was probably my favorite of everything during the time of consumption.  Though, within minutes after, I could feel my heart begin to slow down.

After a 5 minute break, I indulged in the last item I ordered- a meaty breakfast burrito.  This is basically what I desire from all breakfast burritos- meat, eggs and cheese rolled into a tortilla.  Nothing else.

Not gonna lie, I expected some form of pre-cooked eggs that would barely resemble the look/taste of what they were imitating.  I was pleasantly surprised when I found them to be that of only satisfactory scrambles eggs from a New York deli breakfast sandwich.  This was a good thing!  The cheese brought them together with the supposed “sausage” and “bacon” also stuffed into the burrito.  When submerged in that chocolate shake, it made me question every food related convention I’d come to know as well as some significant personal experiences in my life thus far.  A meaty breakfast burrito dunked in a chocolate shake.  Do yourself a favor and at least try it.

After the last bite of food I was both happy and depressed.  Happy I could still breathe, depressed at what I knew would be a ridiculous calorie count.